It was an impressive moment when the Legacy 600 took off from Oberpfaffenhofen Special Airport at the end of September. The aircraft had been out of service for almost a decade. Now, thanks to the outstanding work of General Atomics AeroTec Systems (GA-ATS) employees, it has been returned to service and successfully completed its first flight from Oberpfaffenhofen, Germany to Rivers State, Nigeria, to be handed over to our customer, his Excellency Nyesom Ezenwo Wike, Governor of Rivers State.

After nearly 10 years without a flight, extensive and complex work by General Atomics AeroTec Systems and project partner AeroVisto was required to make the Nigerian government aircraft airworthy again. But the long and extensive work paid off, as it was a memorable and satisfying moment to see a business jet taking off and flying again after such a long time.

The business jet specialists from General Atomics AeroTec Systems, an authorized Embraer Service Center facility, completed a scope of work that was exceptional both in volume and in expertise.

Due to the long downtime, heavy scheduled base maintenance and customized service tasks for return to service had to be carried out. GA-ATS conducted for this purpose, a landing gear overhaul, an engine shop overhaul and an APU shop overhaul among other things. Furthermore, various other modifications and upgrades as well as finding rectification were carried out in Oberpfaffenhofen.

Together with our project partners from AeroVisto, a complete cabin overhaul was realized. Among other things, new high-quality carpets and seats were installed. In addition, the Legacy 600 aircraft received an exterior painting in the VIP Paint+ shop of the German aircraft manufacturer General Atomics AeroTec Systems.

At the end of September, the aircraft was transferred from Oberpfaffenhofen, Germany to Nigeria, where it was happily received by our customer, his Excellency Nyesom Ezenwo Wike, Governor of Rivers State. The arrival was covered by a regional television station.

"We are pleased to successfully complete this major project and hand over the Legacy 600 to our customer, his Excellency Nyesom Ezenwo Wike. It is a pleasure to see the aircraft now back in service after such a long time. The entire team involved has done an excellent job” said Florian Rohe, Managing Director of GA-ATS.

Here you can find the report of the local Nigerian television station: https://www.youtube.com/watch?v=m9N6xarCPlQ. 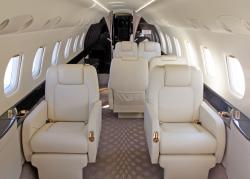 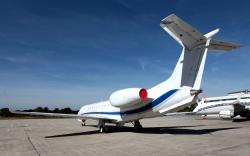